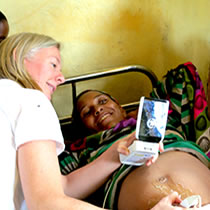 Dr Karen Ballard, a senior lecturer in Women’s Health at the University of Surrey, writes about her year as a volunteer for Maternity Worldwide caring for pregnant Ethiopian women in a rural clinic.

Balaynesh is 17 years-old. At least she thinks she is, but when you don’t celebrate birthdays, you easily lose count of the years. She arrived at an antenatal clinic I was running in the rural highlands of western Ethiopia, having heard that there was a farengii (foreigner) carrying out ultrasound scans on pregnant women.

Like most women I saw, Balaynesh had walked for just over two hours along the rust-tinged dirt tracks to get to the clinic. She sat patiently with the other 20 or so women, all prepared to wait many hours for their turn. Perhaps it was a welcome relief from the relentless grind of daily work.

Each day, women carry several litres of water from the stream, collect heavy loads of firewood for cooking and heating, prepare whatever food has been grown in the fields, wash the clothes in the stream, clean the house and care for the children. If she has any daughters, they will often be enlisted to help, their presence at school being viewed as less important.

Despite the harshness of their lives, the smiling faces of these high cheek-boned women, with their classically almond shaped eyes, reveal a sense of acceptance of whatever care they will receive in this shabby, poorly equipped and dimly lit health centre. As I squirted ultrasound gel on Balaynesh’s abdomen, she giggled nervously at the curious experience of being examined by a farengii, whose attempts to speak the language resulted in limited communication. Advances in technology allow us to bring portable ultrasound machines, not much larger than a mobile phone, to the most rural areas of Sub-Saharan Africa. They allow women, who do not even have access to a mirror, see images of their unborn baby.

Balaynesh is shown the baby’s head and its beating heart. For a few seconds a completely unguarded smile lights up her entire face. “There are two babies,” I gently explain, knowing that this news is unlikely to be received with joy.

Giving birth to twins can be hazardous, even with excellent health care facilities. In rural Ethiopia, limited transport along unmade roads, and a lack of finances to access this transport, means that the vast majority of women will deliver their babies on the hard, mud floor of their home. They will receive no pain relief. They may be in complete darkness. They may be alone. If labour becomes complicated, they will walk or be carried on a stretcher to the nearest health facility, often two or three hours away. If it is dark outside, seeking assistance must be delayed until morning. Even when women reach the health centres, the treatment they need may not be available. Most rural health centres have limited supplies of water, electricity, equipment and drugs. They cannot provide caesarean sections or blood transfusions and staff are only trained to deal with simple childbirth complications. Being pregnant with twins means that Balaynesh is likely to require hospital care. Yet, her labour may commence at night when it is almost impossible to reach the hospital town. The transport costs will require her family to sell a coffee tree or a cow to raise the money; leaving their ability to provide for future family needs significantly reduced.

While a voluntary worker in Ethiopia, I was constantly astonished by the courage of women facing childbirth. They were aware of the risks they face. With a maternal death rate of one in every 30 women, they will all know someone who has died in childbirth. Yet they continue to deliver at home to avoid “unnecessary” costs. They work right up until the day they give birth and may even deliver the baby on the side of the road, after which they will rest for just a few hours before walking back home. Perhaps most astonishing of all is that these women endure all of this while also knowing that one in every 17 children will die before their first birthday.

When I first arrived in Ethiopia, I was overwhelmed by the level of poverty, and what at first, seemed to be a hopeless situation. I had signed up for a year here and my biggest fear was that I would not really achieve anything of value. At every corner, there seemed to be so many people with insurmountable problems, and they all seemed to be looking to me for help.

I was extremely lucky to have been given one valuable piece of advice from a friend in England who had also worked in Ethiopia. She told me that I would be confronted with vast numbers of people asking for help, and that I would certainly believe I could help many of them. However, she advised me to remain focused on what I was there for, and not to be tempted to take on everyone’s problems. Otherwise, she warned, I would achieve very little and end up exhausted and frustrated, running around trying to sort one problem after another.

It was impossible for me to walk away from someone who was seriously hungry or someone who could not afford to pay for life-saving medical treatment, but I soon realised that there were very many people in this situation. At first, I found it tremendously difficult to live in a world where very basic needs were not being met and I often lay awake at night, wondering what had happened to various people in extreme poverty that I had encountered.

While I don’t think it was ever easy to accept the suffering and the inequalities, I eventually adjusted to living among it and achieved some satisfaction from the knowledge that I was improving the outcomes for the pregnant women I met at the antenatal clinics. I left Ethiopia with some incredibly fond memories of the people I encountered, many of whom have become treasured friends. They have welcomed me into their country and proudly shown me their way of life. They have invited me to eat in their homes and marked our friendship with coffee ceremonies. They have shown great courage and strength in dealing with their difficult lives, and their acceptance of adversity is remarkable. I recently visited Ethiopia for two weeks and was greeted by one of the nurses I used to work with, who had travelled on buses for two days to greet me. With so little, people can give so much.

This article was published on The Telegraph website on 17th May 2013.